Posted on November 4, 2011 by bestbathroombooks

The Germans have a word for the feeling of pleasure you get when you see someone else fall on their ass.  This word is schadenfreude, strictly defined as the pleasure derived from the misfortunes of others.  The fact that the Germans have a word for this says tons about their culture, but the cool thing about schadenfreude is that it’s a single word that encompasses a concept.

And this brings us to irony.  This word gets literary people’s hackles up, because the definition is vague (differs from dictionary to dictionary to Google search) and it gives the intellectual crowd room to argue about what’s ironic and what’s not.  Just look at the firestorm that came about when Alanis Morisette wrote a song titled “Ironic” and was round-pounded because some of her verses weren’t “ironic enough”.

Irony is defined as: an outcome of events contrary to what was or might have been expected

When the figurative unexpectedly becomes the literal.

There seems to be a gray line between irony and bad luck, irony and coincidence, irony and unfortunate incidents happening.  So I decided to write this blog—not to clear up the confusion—but to add to it.  It seems like there are varying degrees of irony, and I’d like to demonstrate this.  But before I do, I’d like to show you this Chinese translation I got from “Google Translator”.

What I typed in was: The feeling you get when you sit down to poop and the phone rings.  Not ironic, but it has the word poop in it (www.bestbathroombooks.com, )so I wanted to include it.

For your consideration, here are some examples of irony.  I’m trying to figure out what to call something if it’s beyond ironic.  Ironitastic?  Ironamazing?

The first photo is of a Michael Jackson statue.  The statue is made of iron.  And yes, the knees on this statue are iron.  So there are two iron knees on this statue.  But that’s not irony.  That’s a shitty pun  (not including the iron diaper he’s wearing).  The fact that the iron knees don’t bend makes it a little ironic.  But if the statue were to fall on a group of young fans of Michael Jackson and crush them—and they were all there because they’d come from a foster home for sexually-abused children–then it would be pretty fu*king ironic. 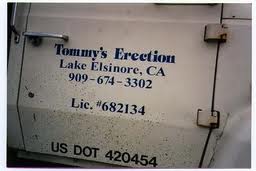 This is a picture of a truck door.  The fact that the guy really has an erection company is amusing, but not ironic.  Now if the man driving the truck was impotent, that would be ironic.  And if the guy’s real name was Dick instead of Tommy, well then, that would be more ironic, right?  Shouldn’t there be a word for “more ironic”, something that takes it to the next level?

We should ask the Germans. 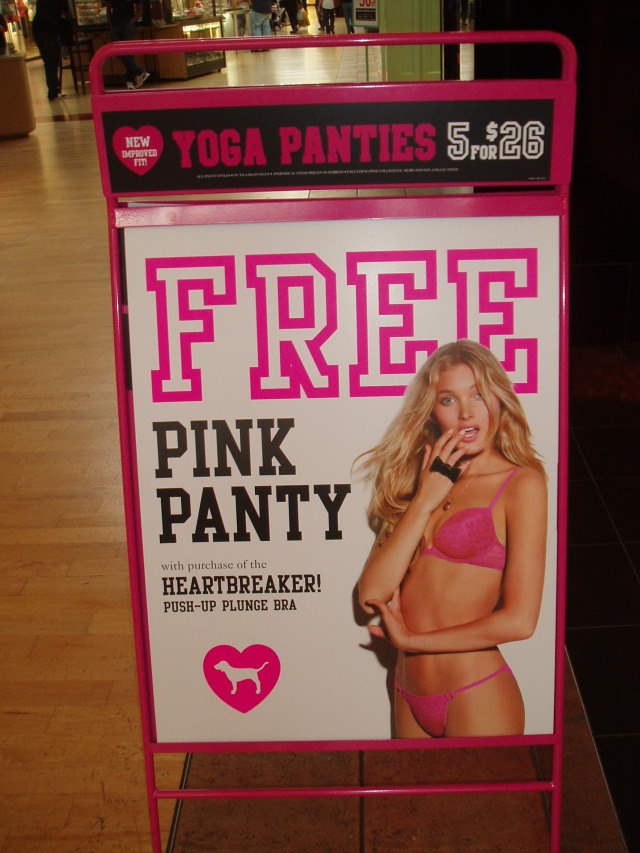 The last photo is one I took at the mall.  This mall is near Solyndra, (the solar panel company that ripped off US taxpayers for half a billion) and I’m pissed I didn’t take a picture of myself in front of the Solyndra sign, but I forgot because I wanted to get away from the mall as fast as possible.

While in the mall, I saw this sign.  This sign has nothing to do with irony, but fortunately for me and this blog, it has to do with language.  It also has to do with Victoria’s Secret supermodels and underwear, which to me are at least as confusing as irony, largely because there are many things I don’t understand about women’s underwear.  And I haven’t even gotten to the thong yet.

NOTE: It would be ironic if someone Googling “Women’s underwear” who had never understood irony clicked on this blog, appreciated the deep meaning of the word, then went outside and got run over by a Victoria’s Secret truck.

Things are more ironic if someone dies.

So look at the sign.  It says Free Pink Panty. Singular.  Panty.  This is the part I don’t understand (along with thongs—or is it thong?)

Can there be a singular panty?  I don’t wear pant.  I don’t use plier.  I don’t cut paper with scissor.

So, women, explain “Panty” to me.  For my UK readers, do you ever say “look at my knicker”?

And lastly (they told us never to use lastly when wrapping up, so I’m using it here), what is the point of wearing a thongs?  I can see it in a romantic situation, because it isn’t going to stay on (or up your buttcrack) for very long.  But day to day, it seems inefficient, much like wearing a very short pant when large pant would be better.

Now I think irony would be if I were secretly wearing one of my wife’s thong right now and enjoying it immensely.

Breakfast of Champions by Kurt Vonnegut

“Ironic” by Alanis with a little help from Drunk Girls:

I run a small publishing company and am presently seeking the funniest, coolest and most marketable ideas to sell in places like Urban Outfitters, Papyrus, college bookstores and independent bookstores in the Humor Sections. Contact me through this blog or better at www.bestbathroombooks.com. There are some talented people out there writing good, funny, conceptual books and blogging some funny stuff. I wish I had time to read more and write more. I have a day gig and do a lot of other things, but blogging helps me stay connected to my laptop and ensures sterility (due to EMF on my testicles) which is great because I've had enough kids. Les
View all posts by bestbathroombooks →
This entry was posted in Kinda Funny and tagged funny, humor, irony, language, panites, panty, thong, Writing. Bookmark the permalink.

12 Responses to Irony and Women’s Panties